I have been sick or sleeping all day and am in no condition to write the next installation of Stiletto. Hopefully I'll be back to normal tomorrow.

EDIT Feb. 27: Still sick, though getting much better. I think at this point, I'll just plan on posting at the usual time on Friday.

> More Sleep!
Yes. More sleep is an excellent idea. You roll over into a new position, close your eyes and relax. You take deep breaths and count those imaginary fluffy ruminants grazing in their fictitious pastoral glade, drinking by clear brooks, chewing cud, wandering off from the flock only to be found by the shepherd and having their legs brutally broken as a warning to the rest of the flock: "this is how we do tings 'round 'ere. No wanderin' off or we come after you, bub..."

The sun is still assaulting your eyes relentlessly, even when you close them. Your achy head and muscles and your desert-like mouth refuse to give you peace long enough to drift off into the Sandman's sweet embrace.

> First comment ever and I'm spam. :(
There's probably a deep lesson in this about the Nature of Life, the Internet, and Everything, but in your present mental state, you have no idea what it could be.

> You like this.
No. No, you do not like this, and if there's only one thing you learned from the Mostaccioli Incident of '09, it's that Positive Thinking doesn't actually help anything.

Your turn to do some writing! Leave a comment with what you think our intrepid heroine should do next. Commands can be simple, like what you might find in a text-based computer game such as "LOOK AT—" or "GO TO—", or they can be more complicated, like "gather up a large crowd of fuzzy purple teddy bears and organize a nice Virginia Reel. And play something slow and thoughtful like Watching Judas's 'I Fall,' none of that crazy bluegrass silliness." On Tuesday, I will pick the command(s) I think will move the story along in the best or most interesting way and write the next segment from there.

IMPORTANT NOTE: I'm having trouble with LiveJournal's spam filter for anonymous comments. I'm trying to figure out if there's any way to make it less restrictive, but in the meantime, please consider signing in to increase the chances that I actually see your comment. You don't have to have a LiveJournal account. If you click on the dropdown menu in the "From" line of the comment form, you can choose to post from another account, including Facebook, Twitter, Google, and OpenID. If that doesn't work for you, I'll also take commands through other forms of textual communication, such as Twitter or Facebook.

The sun streams in through the window, hitting you squarely in the closed and formerly-sleeping eyes. You silently curse whoever had the brilliant idea of facing your bedroom window to the southeast. You then add on another curse to yourself for apparently flopping into bed last night without closing the thick curtains you obtained specifically for the purpose of remedying the architect's oversight.

Your groggy brain registers a dull, inexorable headache pressing on your eyes and frontal lobe, as well as several achy muscles. Is this what a hangover feels like? You only had like two drinks at the whole five-hour reception—the super-fancy imported Champagne for the toasts, which was so expensive that Jani insisted all the bridesmaids finish their glasses so as not to waste any; and a few sips of the very classy (very dry) wine that cute guy brought you when he was flirting after neither of you caught the bouquet or garter. So a drink and a half.

Your mouth is dry, your head hurts, and you feel like you're too tired to do much more about the window than think about it really hard and hope to close the curtains telepathically.

Your turn to do some writing! Leave a comment with what you think our intrepid heroine should do next. Commands can be simple, like what you might find in a text-based computer game such as "LOOK AT—" or "GO TO—", or they can be more complicated, like "gather up a large crowd of fuzzy purple teddy bears and organize a nice Virginia Reel. And play something smart and classy like Hank Green's 'Strange Charm,' none of that boring instrumental silliness." On Friday, I will pick the command(s) I think will move the story along in the best or most interesting way and write the next segment from there.

Today I found a time machine. Naturally, the first thing I did was go back in time to the day of my birth and posted a new schedule on my blog.

Seriously, though, this is the last schedule-related post I anticipate posting. I know it's not that interesting to read about my indecisiveness, but I want to post my schedule so that I feel like I have the accountability. So from now on, I've got a schedule summary in the sidebar, and a more detailed schedule here.

I've also decided that, for the time being, Sunday posts will be optional. Sundays tend to be pretty busy for me, and it's good to have a day of rest.

Still sick today, and I'm not really expecting to get much better for at least several more days. Because that's how these things work. But I am expecting to get back on a regular update schedule next week. So stay tuned for all kinds of fun stuff, coming soon to a blog near you.

Stuff happened. My sinuses continued to produce more mucous than I'd like. It's nearly time for bed. Good night.

I've still been sick today, but it's been a pretty good Valentine's Day, anyway. Yesterday, I got a package from Amazon with three new books by two of my favorite authors. So naturally this evening, I was anxious to get started on them.

Mr. Monster, the second book of the John Cleaver trilogy by Dan Wells, was perhaps thematically not the best book for Valentine's Day. It's a horror book about a teenage sociopath who is unhealthily fascinated with serial killers. (I'll probably be writing a more comprehensive review of the series soon.) Knowing this full well, this was the book I took with me when I went to dinner (alone) at St. Louis Bread Company, with the intention of sitting around the restaurant reading for two or three hours (alone) after dinner.

Dinner was pretty nice, too. I found a table in a corner, figuring it would be a nice place to sit and read, but still keep an eye on the whole restaurant—you know, in case one of them turned out to be horrifying psychopathic serial killers like the monsters in the book. What I didn't account for was the gaggle of a half-dozen middle aged women the next table over. They arrived a little before me, and sat there the whole time, loudly failing the Bechdel Test, talking about failed dates and that nice guy from church who "just wants someone to go to the theater with." I eavesdropped without really trying as I finished my meal (that salad was HUGE! And the menu said that deal came with a half salad? What are the full salads like??), then took my book and my drink to the other end of the restaurant. The women were still at that table when I left hours later.

So anyway, I had a good evening. I think I'd like to do a little more reading before bed, though, so good night for now.

It usually starts with a sore throat. Then there's the headache, the stuffy nose, the dizziness, the lack of energy.

I've been sick today. It's not a sinus infection yet, but this is how they often start for me. I usually get them about twice a year; apparently when someone with allergies has kids with someone who has sinus problems, the result is seasonal sinus infections. So I've spent most of the day drinking hot cider and staring blankly at my computer screen. Or napping. Maybe I'll get lucky and this won't turn into a full-out infection; it does that sometimes...

So. The last couple of weeks were pretty crazy. The last few days of January and the first couple of days of February were, as I've mentioned, taken up by Aunt Nina's funeral. And, believe it or not, last week was even more insane.

It started on Sunday, when I had to run around before and after the church service coordinating schedules with people. One of the young couples at church had asked me to babysit, and the youth pastor had asked me to chaperon a youth group trip to Founder's Week at Moody Bible Institute in Chicago. Lots of questions, running back and forth between parent and pastor. What days did they need a babysitter? Monday through Wednesday, six hours a day. When was the youth group trip? How big was it? What was a Founder's Week? Wednesday through Saturday, three guys and two girls, Founder's Week involved well-known Christian speakers like David Platt and John MacArthur.

I had gone to church thinking I would say yes to babysitting (I needed the money) and no to Chicago (after three days with three young kids, I'd need some rest, right?), but the babysitting schedule was flexible enough that I could be done before they left for Chicago, and, well, David Platt and John MacArthur. In Chicago.

So Monday-Wednesday, I played hide-and-seek, helped with schoolwork, read kids' books aloud, made paper airplanes and cootie catchers, and gained a whole new level of respect and admiration for stay-at-home moms, especially those who homeschool.

After I was done babysitting on Wednesday, I hurried home, threw some clothes in a bag, and was on a train to Chicago with five teenagers and one youth pastor.

There was very little sleep involved with this whole schedule, certainly less than I would have liked. There wasn't a whole lot of rest, even, except if you count the five hours on the Amtrak to Chicago and the one hour commute each way every day, since we stayed in the suburbs and the conference was in the city. But the activity of running around downtown more than made up for the train time.

Sometimes, the most important thing you can do is rest. But there are other times when resting is the worst thing you can do. I had a crazy week, but it was amazing, and I think if I hadn't been forced into the flurry of activity I would have allowed Aunt Nina's death, along with other circumstances, to pull me into a pretty serious depression. Instead, I think I'm ready to keep going. I've already got some plans lined up: friends are in town, apparently word of my babysitting prowess has gotten around church already, and of course I'm going to continue my daily blog. I'm also seriously tempted to move to Chicago. Those trains were awesome. 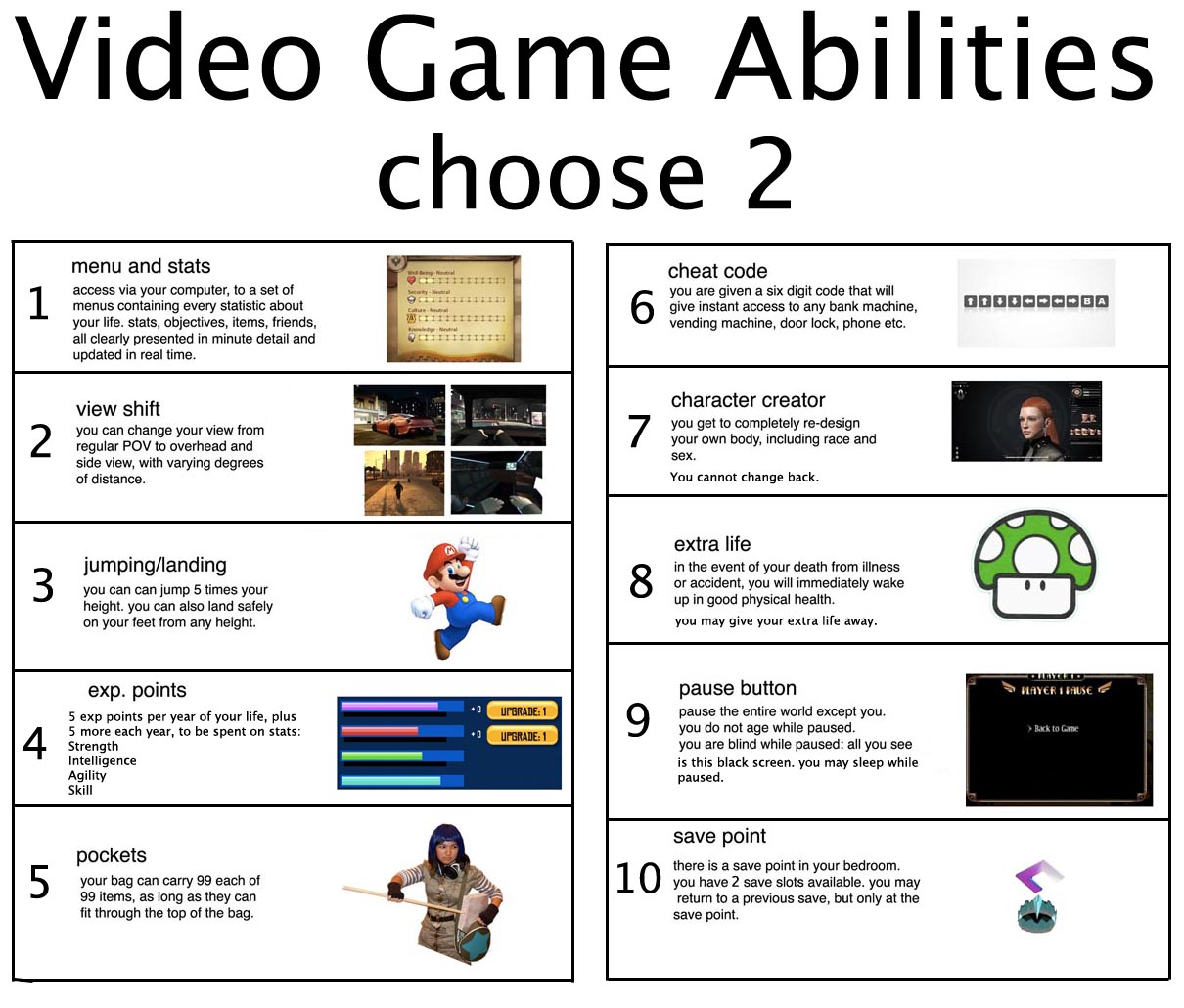 Here's what I think of these options:


So I think I would probably go for the Pause Button (9) and the Pockets (5) in the end. How about you?
Collapse